Natural Disasters and Your Medications: 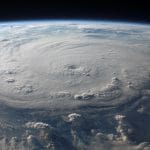 Menacing hurricane viewed from the space

The 2016 Atlantic Hurricane season is upon us. The first few weeks of September is the peak of the season and the probability of the highest number of hurricane formation occurs at this time of the year. Many of you may have seen or heard the effect of Hermine last week. It started in the Gulf of Mexico as a Tropical Depression, intensified to a Category I hurricane, just before making landfall in Florida’s big bend. After making landfall, the storm lost power and once again become a tropical storm. As is usually the case, one expects that to be the end of the storm. However, after crossing the Florida Peninsula, it started reforming in the Atlantic Ocean and once again threatened the eastern seaboard of the United States. The force of the wind and resulting storm surge is driving the waves and water to land causing flooding, and destruction.

Hurricanes are examples of unexpected natural events that could happen. Volcano eruptions, earthquakes, landslides, floods, fires, tornadoes, plagues just to mention a few. The bottom line is that all or any of these events could happen anytime.  Are you ready?

In the event of a natural disaster, are you prepared?  Will you have enough medication to sustain you during the emergency? Will you be able to grab your medication as you rush out of your house in the middle of the night?  If you do not have a sufficient supply of medication, do you have copies of your prescription for a pharmacy to fill them?

I was lucky enough that I survived Hurricane Andrew in August of 1992.  My medication list was different then, but I learned my lesson.  Many of my older co-workers ran out of their medication and had a terrible time getting refills.

If you have diabetes (as well as other medical issues), it is essential to have your medicines, test strips, lancets and glucose meters.  Glucose meters usually need batteries to function, so it is important that the batteries are fresh and functional.  Since diabetics often have other issue with hypertension, and/or high cholesterol, be sure to include these medications as well.

Here is a suggestion.  Always be prepared.  Put all your important documents, including medication lists in one place – there is no time to search for things in the middle of a raging natural disaster.  I keep all my important documents in a waterproof container.  In addition, it is not a bad idea to keep a few day’s worth of your daily medications together with these documents (just be sure you keep the medications current by replacing them every few months). I keep this container in a place that I could easily reach.   I never know when I have to hastily run out of the house.