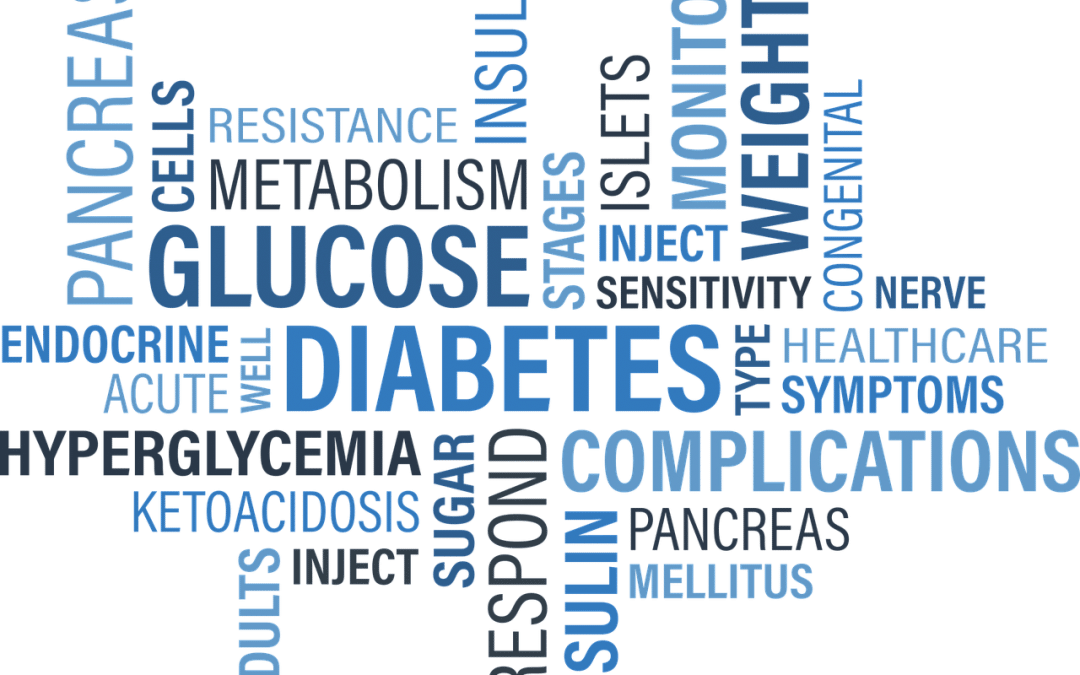 I wrote down a few of the complications associated with diabetes that someone can get if their diabetes is left unchecked or poorly managed. I pulled this information from the American Diabetes Association's website, at www.diabetes.org.  Further down, I explained a few tools that diabetics would use, along with some of the kinds of medications or treatments they might have to use to keep their health in check.

Complications that can come from Diabetes

acanthosis nigricans (uh-kan-THO-sis NIH-grih-kans)
a skin condition characterized by darkened skin patches; common in people whose body is not responding correctly to the insulin that they make in their pancreas (insulin resistance). This skin condition is also seen in people who have pre-diabetes or Type 2 diabetes.

adhesive capsulitis (ad-HEE-sive cap-soo-LITE-is)
a condition of the shoulder associated with diabetes that results in pain and loss of the ability to move the shoulder in all directions.

albuminuria (al-BYOO-mih-NOO-ree-uh)
a condition in which the urine has more than normal amounts of a protein called albumin. Albuminuria may be a sign of nephropathy (kidney disease).

amyotrophy (a-my-AH-truh-fee)
a Type of neuropathy resulting in pain, weakness and/or wasting in the muscles.

anemia (uh-NEE-mee-uh)
a condition in which the number of red blood cells is less than normal, resulting in less oxygen being carried to the body's cells.

arteriosclerosis (ar-TEER-ee-oh-skluh-RO-sis)
hardening of the arteries.

autoimmune disease (AW-toh-ih-MYOON)
disorder of the body's immune system in which the immune system mistakenly attacks and destroys body tissue that it believes to be foreign.

bunion (BUN-yun)
a bulge on the first joint of the big toe, caused by the swelling of a fluid sac under the skin. This spot can become red, sore and infected.

cataract (KA-ter-act)
clouding of the lens of the eye.

cerebrovascular disease (seh-REE-broh-VASK-yoo-ler)
damage to blood vessels in the brain. Vessels can burst and bleed or become clogged with fatty deposits. When blood flow is interrupted, brain cells die or are damaged, resulting in a stroke.

Charcot's foot (shar-KOHZ)
a condition in which the joints and soft tissue in the foot are destroyed; it results from damage to the nerves.

congestive heart failure
loss of the heart's pumping power, which causes fluids to collect in the body, especially in the feet and lungs.

dermopathy (dur-MAH-puh-thee)
disease of the skin.

diabetes insipidus (in-SIP-ih-dus)
a condition characterized by frequent and heavy urination, excessive thirst and an overall feeling of weakness. This condition may be caused by a defect in the pituitary gland or in the kidney. In diabetes insipidus, blood glucose levels are normal.

diabetes mellitus (MELL-ih-tus)
a condition characterized by hyperglycemia resulting from the body's inability to use blood glucose for energy. In Type 1 diabetes, the pancreas no longer makes insulin and therefore blood glucose cannot enter the cells to be used for energy. In Type 2 diabetes, either the pancreas does not make enough insulin or the body is unable to use insulin correctly.

diabetic diarrhea (dy-uh-REE-uh)
loose stools, fecal incontinence, or both that result from an overgrowth of bacteria in the small intestine and diabetic neuropathy in the intestines. This nerve damage can also result in constipation.

diabetic ketoacidosis (DKA) (KEY-toe-ass-ih-DOH-sis)
an emergency condition in which extremely high blood glucose levels, along with a severe lack of insulin, result in the breakdown of body fat for energy and an accumulation of ketones in the blood and urine. Signs of DKA are nausea and vomiting, stomach pain, fruity breath odor and rapid breathing. Untreated DKA can lead to coma and death.

diabetic mastopathy
a rare fibrous breast condition occurring in women, and sometimes men, with long-standing diabetes. The lumps are not malignant and can be surgically removed, although they often recur.

diabetic myelopathy (my-eh-LAH-puh-thee)
damage to the spinal cord found in some people with diabetes.

diabetic retinopathy (REH-tih-NOP-uh-thee)
diabetic eye disease; damage to the small blood vessels in the retina. Loss of vision may result.

Dupuytren's contracture (doo-PWEE-trenz kon-TRACK-chur)
a condition associated with diabetes in which the fingers and the palm of the hand thicken and shorten, causing the fingers to curve inward.